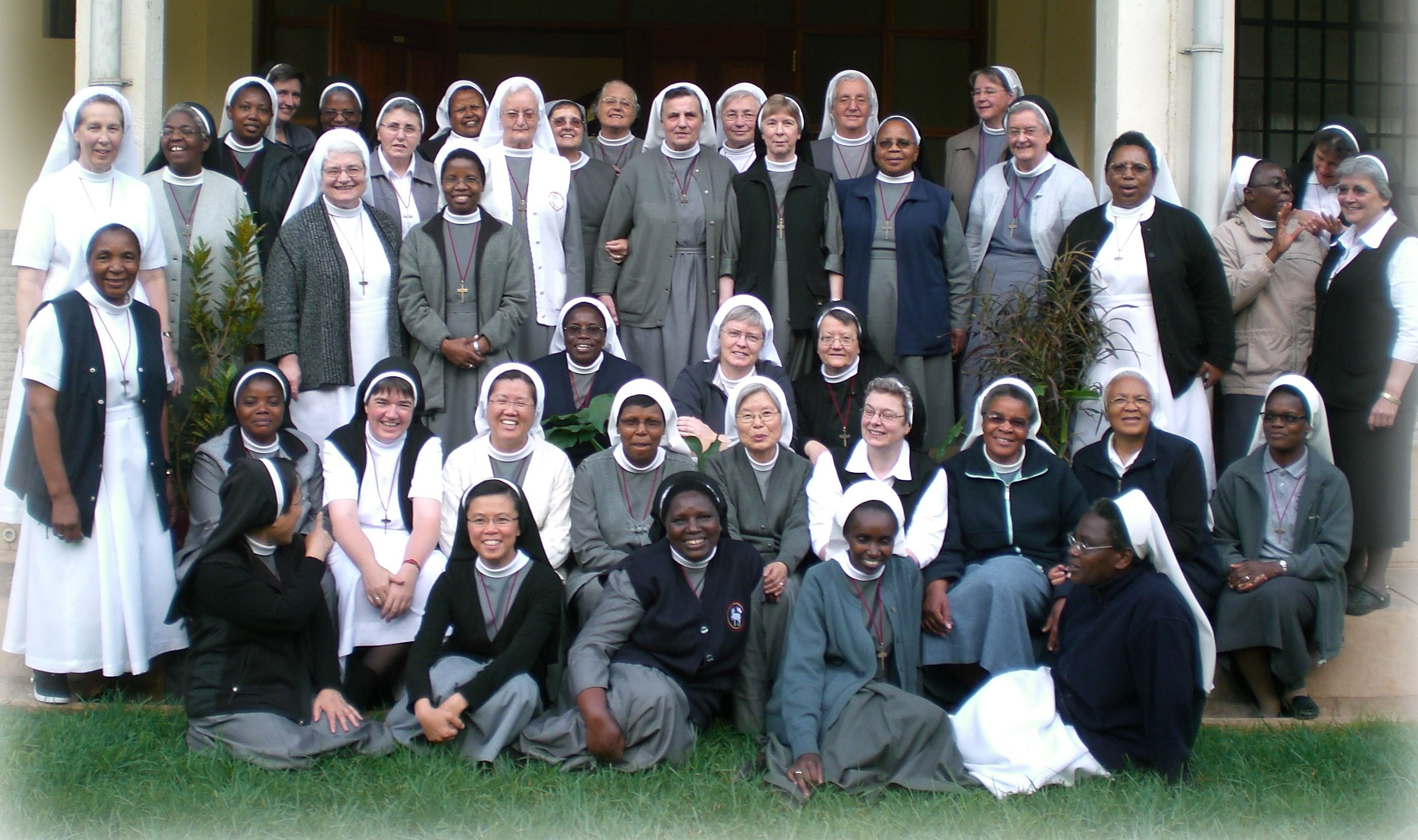 We, the Missionary Sisters of the Precious Blood, CPS  (the abbreviation CPS stands for Congregatio Pretiosi Sanguinis in Latin), are an international congregation of women, founded by the Trappist Abbot Francis Pfanner in Mariannhill, near Durban, South Africa, on the 8th of September 1885.
With the title  Missionary Sisters of the Precious Blood, our founder wanted us totally committed to the service of Christ’s redeeming love, to make the Precious Blood of Christ fruitful for all (Const. 102).  Our title is our mandate: to live the Paschal Mystery and to witness to the redeeming love of Christ.

Our Life - which is mission itself - gives glory to God. 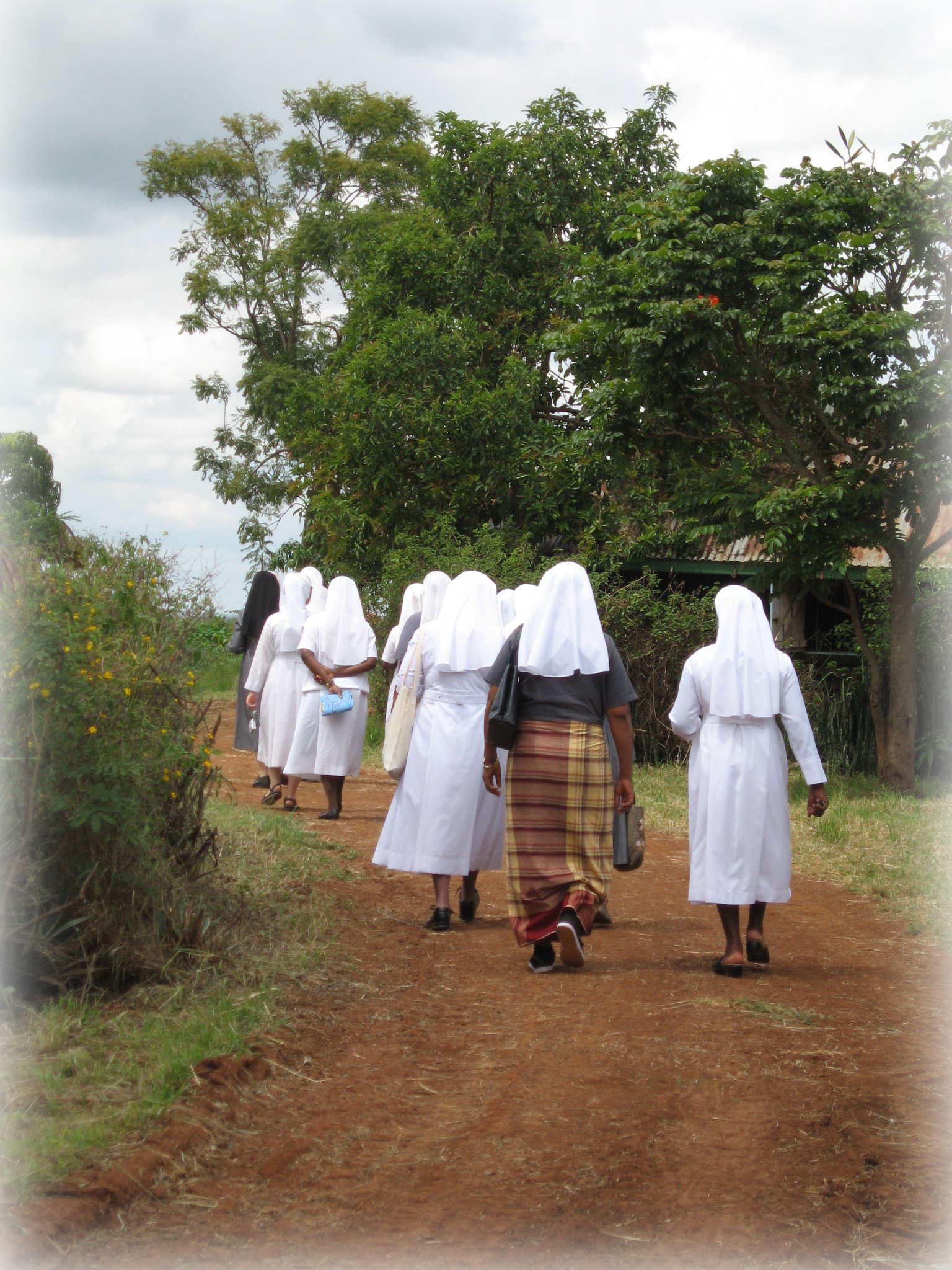 Mission to and among people and readiness to be sent wherever the need is greatest are essential elements of our life and spirit. Our legacy received from Abbot Francis Pfanner is imbued with the Benedictine spirit. This contemplative-missionary heritage of our Founder inspires us CPS worldwide to commit ourselves to fulfill our religious and missionary calling of ora et labora, pray and work.  The challenges of today speak to the heart of this our double vocation and call us beyond the familiar to new ways of being and witnessing in the world and for the world. It also means to stand with Mary under the cross in ready attentiveness to God’s word.
From simple beginnings in South Africa over 130 years ago, our Congregation grew and expanded to other countries.  In response to the needs of the times, we, the Missionary Sisters of the Precious Blood, continue to begin new missions.
Since our foundation in 1885, we Missionary Sisters of the Precious Blood guided and accompanied seven African Sisters’ Congregations till they became autonomous.
They are:

During the nineteenth century the Church renewed its interest in Africa with new missionary endeavours and with a new vision. One of these was the Trappist monk Francis Pfanner.
Abbot Francis embodied the spirit of Vatican II in his legacy and vision long before the Council took place. He had a passion for responding to God’s missionary call with joyful readiness drawn from his intimate relationship with the triune God.
Therefore prayer and work, fidelity to the Eucharist, and devotion to the Precious Blood were also to be essential elements of the identity of the CPS, the Missionary Sisters 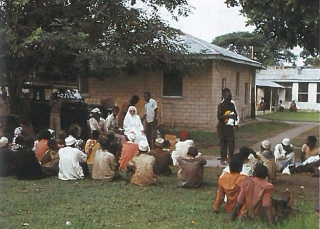 of the Precious Blood. Witnessing to the redeeming love of Christ was to be their ‘stigma’. This spiritual dimension was not to be separated from being involved in social concerns for the poor and marginalized. His missionary commitment and zeal were inspired by Jesus’ example who did not simply let the ‘poor’ listen to him, but went to find them. This vitality is reflected in the founder’s wish for his Sisters: They should enter the homes of the indigenous people with smiling faces, friendly, cheerful and obliging… The missionary approach Better Fields -  Better Homes - Better Hearts  (Bernhard Huss CMM) helped to promote holistic Christian development and inculturate the Gospel values.
Each congregation has its unique history which reflects the spirit of its founder or foundress.
We see in Francis Pfanner a personality whom God has shaped. 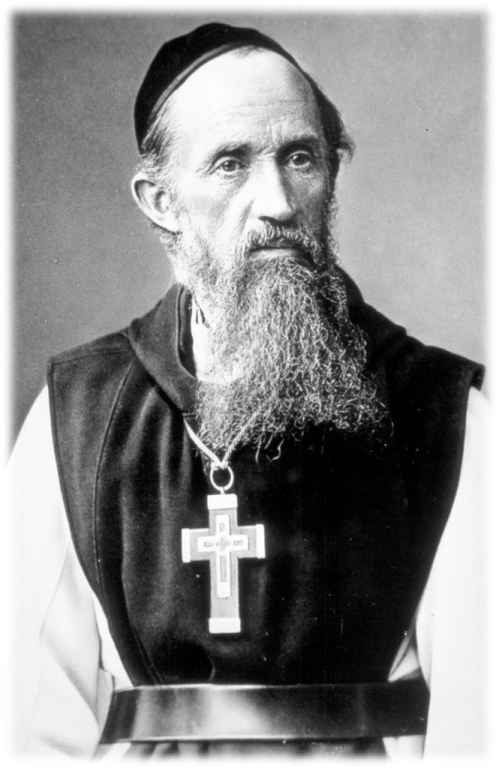 Born as a son of a farmer on 21 September 1825 in Langen, Vorarlberg, Austria, Wendelin Pfanner was ordained Priest in 1850. He served as parish priest, confessor to Sisters and was appointed extraordinary prison chaplain. Despite his ill health he undertook several journeys to Rome and to the Holy Land before he joined the strict contemplative Trappist order to live a life of prayer, penance and silence.
In 1864 he pronounced his first vows at the Mariawald Trappist Monastery, Germany, as Father Francis, the religious name he was given. His talents and tenacious character were quickly apparent and he was sent out to establish another Trappist Monastery which he called Mariastern, in Bosnia.

In 1872 he was appointed Prior of Mariastern. During the General Chapter of the Trappists in Sept Fons, France, in 1879, a visiting Bishop from South Africa asked for missionaries for his diocese. It was so unusual that Trappists, known as “silent monks” who lived strictly contemplative could be asked to become missionaries in foreign lands! It was even more unusual that the youngest Chapter member broke the silence of the situation, stood up and said: If no one goes, I will go!

In 1880 he travelled with a group of fellow Trappists to South Africa. This readiness to set out on the ad gentes journey to Africa made the foundation of our Congregation possible.
In 1882 Prior Francis had established the monastery of Mariannhill (Mary-Ann-Hill) which became already in 1885 an abbey, the biggest Trappist monastery in the world with over 300 members.
In 1885 on 1 September, as a result of his enthusiastic articles in the German Catholic press, five young German women travelled to South Africa to join his missionary work. They had a vocation to the religious life, and were eager to have a specific common rule of life. They were given red material to sew a simple uniform which they wore for the first time on 8 September 1885, and received their community rules, this is considered the date of the founding of our Congregation, the Missionary Sisters of the Precious Blood. Francis Pfanner recruited all the new members of the newly founded congregation personally up to 1892. 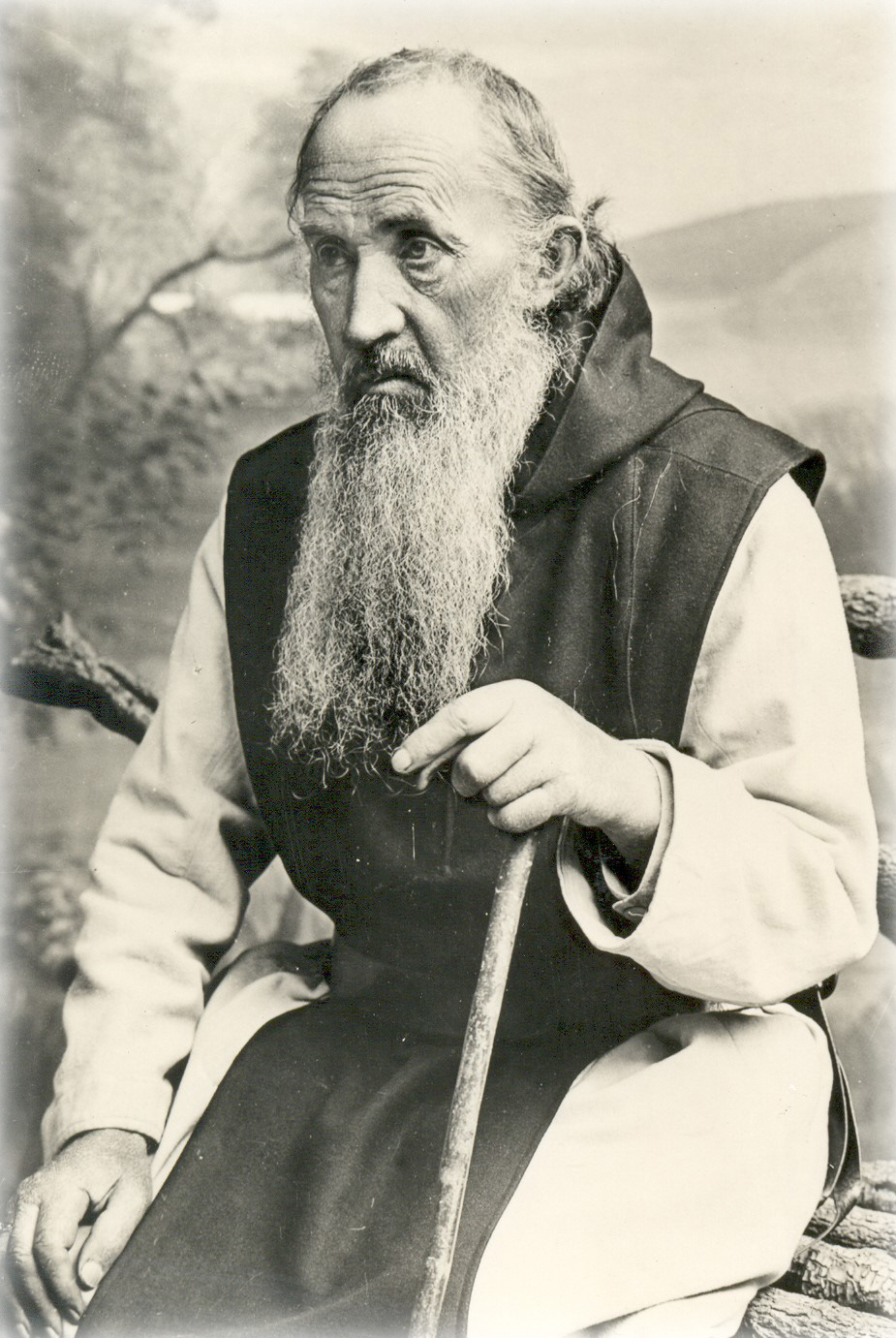 He spread a net of mission stations over the southern part of Natal, South Africa, and beyond, with his monks and the Sisters. A great problem was the conflict between mission activity and the Trappist rule. It became so acute that he had to resign as Abbot of Mariannhill.
In 1894 he went to the mission station called Emaus where he continued the work of evangelization, faithful to the end in prayer and work and especially in his suffering while the Sisters’ community has grown in numbers..

Our Co-Foundress:  Sr. Paula Emunds  1865 - 1948
The life of Paula Emunds, our co-foundress, was inspired and guided by Abbot Francis Pfanner in her responsibility for the growing congregation. 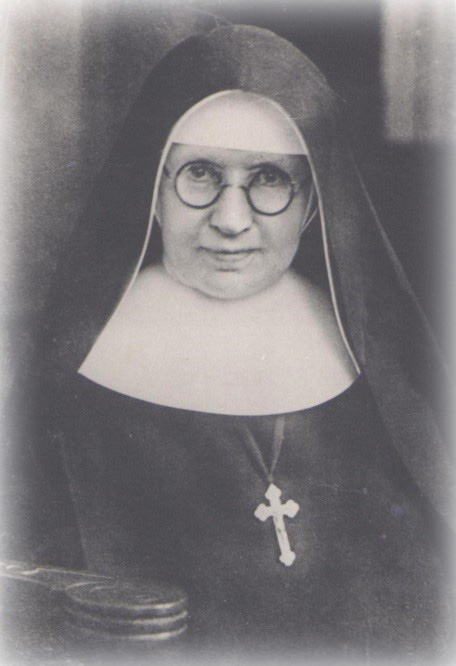 Slight in stature, she was commanding in presence.
woman of her times, she embraced innovation.
She advocated joy, but she suffered agony.
In positions of authority,
she felt humble and inadequate.
She was Paula Emunds,
co-foundress of the Missionary Sisters of the Precious Blood.
(Ann Marie McLeod)

Josefine Emunds was born in the small village of Schleiden, Germany in 1865.
At only 19 years she became one of the pioneers who journeyed to Africa to serve God and his people. On 7 October 1886 she arrived at her destination Mariannhill, near Durban and already a month later she made her commitment and received the name Paula as her religious name. On 8 December 1888 she pronounced her first vows. At the age of 22 she had to take up leadership of the Sisters and was already in charge of 34 novices and 15 postulants. Sister Paula was recognized as a daughter of the Founder among the Sisters..
Her innovative spirit emerged when by the end of 1887 Sr. Paula was welcomed indigenous candidates. However, this was discontinued and left to future generations. She supported also a second innovation by accepting secular persons who should work with the Sisters. Struggles with the challenge of religious vocation, institutions and structures, and the ideals of obedience and service made Sr. Paula the strong and faithful woman that she was.
Sent back to Germany, she was appointed Assistant Superior and Directress of Formation in Kirchherten  and two years later, in 1891, Sr. Paula became Superior and Directress of Formation in Helden-Panningen, The Netherlands, the then Formation House in Europe for our Sisters. During the twelve years in Panningen more than 200 Sisters had, under her direction, obtained their religious and missionary formation in the spirit of the Founder. In 1903 the Sisters’ community moved into Heilig Blut, the future mother house of our congregation and, for many years until 1971, the seat of the general administration.
On 15 July 1907 Sr. Paula was elected as First Canonical Superior General at the General  Chapter in Mariannhill.  In 1935 there were 510 Sisters out of a total of 891 working in Africa, in the United States and Denmark.
At the Chapter in 1947, Mother Paula, as she was then called, retired officially from all congregational positions. On 21 May 1948 she died and was buried in the cemetery of Heilig Blut, Aarle Rixtel, The Netherlands.
Mother Paula’s legacy became so clear, abiding and alive during her life’s journey as CPS, her leadership and compassion unquestioned. (McLeod). She was a valiant woman who, with undeserved dedication to God and her vocation, devoted herself to what was asked of her, acting always on her better insight and conscience. By prayer and trust in God she always rose above herself.
Mother Paula guided the unfolding of our congregation in the spirit of the Founder. She was a missionary rooted in contemplation and aflame with missionary zeal. Her spiritual legacy and that of Abbot Francis Pfanner are laid down in The Inner Spirit that serves as spiritual guideline for each CPS until today.

The Inner Spirit of the Missionary Sisters of the Precious Blood situated in the Spirit of Father Founder  by Sr. M. Annette Buschgerd (Article). 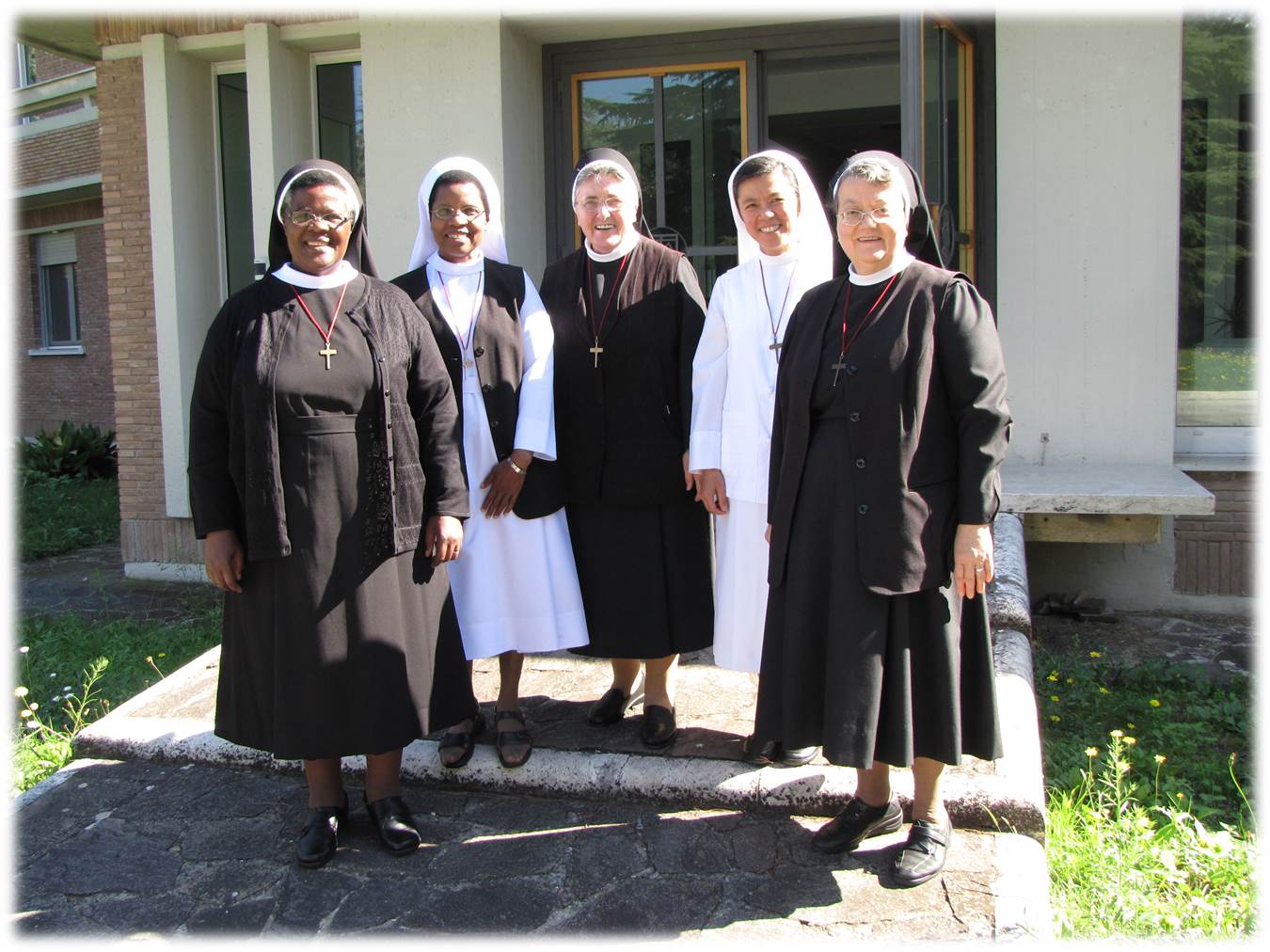 to end the covid-19 pandemic