St. Joseph . . . through the eyes of Abbot Francis Pfanner 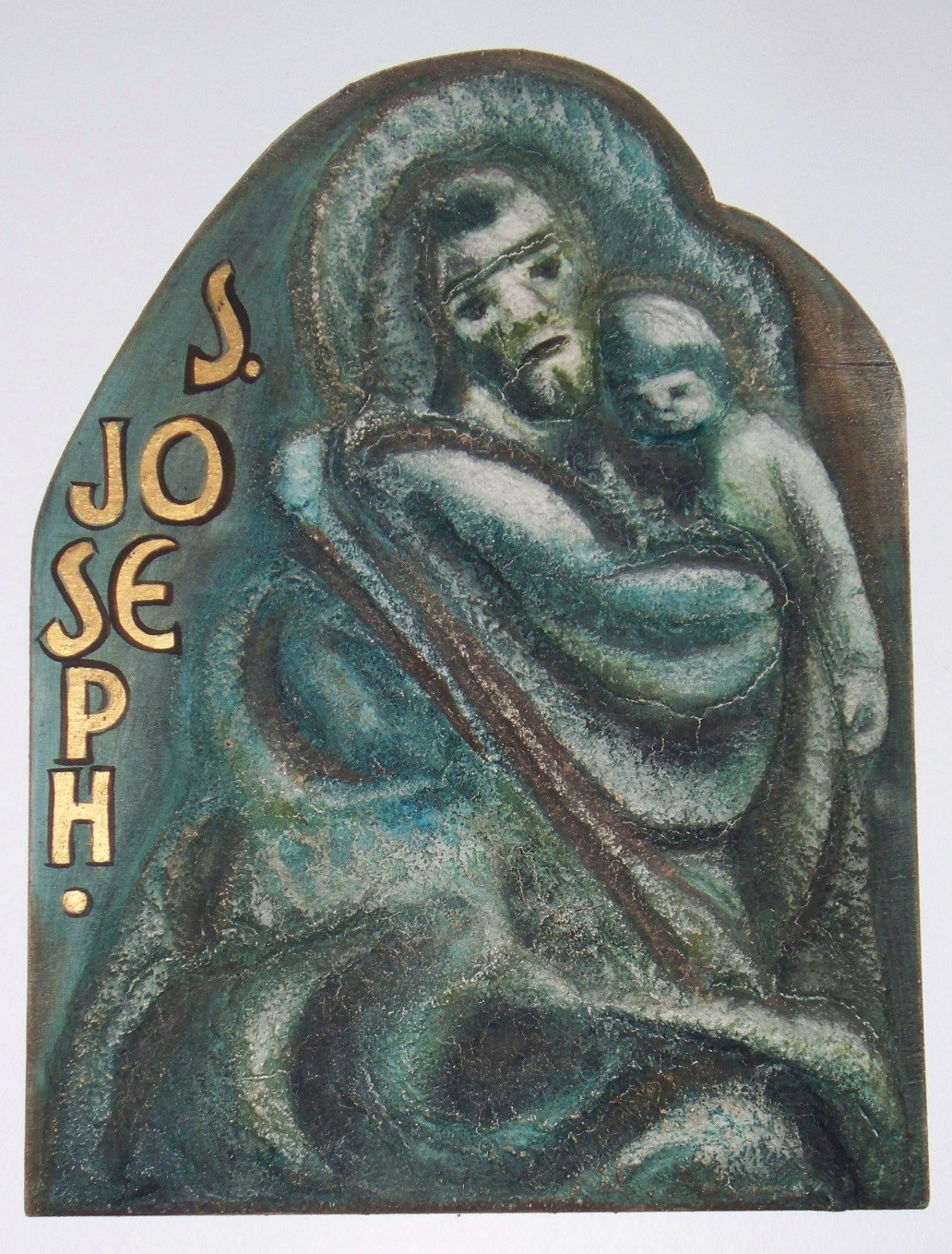 The ways of divine providence can best be seen in the life of Joseph of Egypt. After he had made himself known to his brothers, he made it clear to them how Providence had provided by telling them: "God has made me master of His entire house; for your benefit He sent me before you into Egypt." The same may be said of St. Joseph: 1. God set him over the Holy Family. 2. He placed him among non-believers.

1. Joseph, the Provider
If God made St. Joseph the master of his household, we must not imagine that he was a ruler like Joseph of Egypt, but a gentle householder who was more concerned with his God-given responsibilities than his rights. He considered it his duty to feed and clothe his holy foster son and his mother and to give them shelter.

How did he do this? Scripture tells us that he was a carpenter, and we must assume that he made a living for himself and his family by manual labour. How comforting this is for craftsmen. We may almost certainly assume that St. Joseph did not farm, because he seems to have been too poor to own land. Likewise, he would not have engaged in trade, for the simple reason that he loved seclusion and thus avoided everything that required frequent contact with people. Might he have relied on alms rather than on his axe and saw? Considering his humility, he would not have been ashamed or refused to beg, like the unjust steward in the Gospel, but because he was honest and perfectly "just" he preferred hard manual labour to soliciting alms, Incidentally, begging for alms would have been doubly hard for him since he was of royal blood and now lived in poverty. Such people, even if reduced to poverty through no fault of their own, like St. Joseph, are always held up to ridicule. There would have been little compassion for him. Therefore, we tend to believe that St. Joseph warded off hunger, nakedness and need simply by his craft, thus teaching a lesson to the working class, including us Trappists!

From what I have said we may conclude that Joseph’s lifestyle was a simple one. Even his little house was extremely simple. In order to save material and work, he attached it to the rock, so to speak, like a swallow does its nest. And how plain it must have looked inside - the house furniture, the table, the bed!

How could St. Joseph have tolerated superfluous things or, “righteous" as he was, any luxury? His conscience would not have let him deprive the poor by having more than what he needed. What a sermon that is for all workers, landowners and Trappists!

To whom shall we go in our needs but to Joseph? He knows better than anyone else what it means to use one’s weak hands to earn a living until old age, to feed a family and maintain it in a manner befitting one's station in life. When will the world recognize that it must return to simplicity if better times are to come? I think the present generation will not recognize it. Therefore, the present generation will also wait in vain for better times. Hoping and waiting makes a fool of many. That's why so many are taking their own lives these days. Waiting for better times makes them fools. Such waiting is also to be considered foolish if a person does not want to do, or refrains from doing, what can help to bring about better times.

If we Trappists compare ourselves with St. Joseph, we are in a much better position than he was. Not only can we rely on manual or skilled labour to earn our living, but we also have farms. What a debt of gratitude we therefore owe to God, not to mention the fact that we can always solicit funds, even though the Brother who does so is often rudely turned away and must learn how much more blessed it is to give than to receive. But then he is comforted again by good and loving people who welcome him warmly and give him all possible support. How many good Christians there still are who joyfully offer their mite to our mission and consider themselves fortunate to be able to put their alms into our hands!

Considering their generosity, let us joyfully continue to offer up our acts of penance for our benefactors and patrons, celebrate Mass for them every day and say our prayers. After all, it is through their generosity that we can feed our 60 poor children and help countless naked people get clothes, which are the first requirements for Christianity.

2. Joseph, the Missionary
Let us place ourselves with St. Joseph and his Holy Family in the Nile Valley among nonbelievers, idolaters and people of colour. If a door was not even opened to poor Joseph in his hometown, if his own countrymen refused him a humane lodging, what fate would have awaited the stranger in a pagan country among people who did not even share his colour of skin? We can assume with great probability that he did not even find a stable as shelter, but had to settle under God's open sky. And it is true that when one comes to Egypt, the pioneering Arabs show travellers or Christian pilgrims the “Mary tree” and tell them that Mary and Jussuf (Joseph) sheltered beneath it. This is one of those trees in the country that always sprout anew and rejuvenate themselves. It is not far from the city of Heliopolis.

My dear Brothers, how rich we were compared to Joseph when we moved to this part of South Africa and were able to sleep on grass under tents or tarpaulins. St Joseph probably had no tent to protect him from the burning sun or the downpours.

On the other hand, having had to abandon everything, he had no choice but to get used to a life similar to that of a hermit. So, we may not be too far off the mark if we imagine that he established the first hermitage or, together with his family, the first little monastery. Might this be the reason why Egypt later gave rise to so many hermits so as to be regarded as the place of origin of monastic life?

However, St. Joseph did not only have to think about his livelihood and about his and his family's spiritual wellbeing, but he was most probably also concerned for the salvation of the people in the surroundings. His foreign accent and appearance would most certainly have caused a stir among them. He, who was "righteous" in every regard, could not have remained indifferent to whether the local people came to know the true God and the newly born Saviour or not. But we must not imagine that he went around the country preaching about the Messiah having appeared on earth. As foster father of Jesus, he simply had no time for that and also no mandate. He dedicated more time to the apostolate of prayer, asking God for Christ’s kingdom to be established and Satan’s domain and sin to be abolished. How fervently the devout and righteous Joseph would have recited the hymn of Zechariah every day, especially the words: "Enlighten those who sit in darkness and in the shadow of death, that they may direct their steps into the way of peace and salvation”!

In this sense everyone can become and be a missionary. How comforting for all, that even though they cannot afford to send money for the baptism of a child or for the education of an unbeliever in the Christian faith, they can still contribute to their conversion with their prayers and ask for their perseverance. But it is even more comforting for you, Trappists in Africa. For you too, like Joseph, have left your relatives, your possessions and your homeland. Indeed, you have even left a part of the world with a temperate climate and have come to Africa, to the same continent as he, to such a hot region with almost the same temperature under which he lived. Moreover, as Joseph brought the Saviour to the unbelievers of Egypt, so we brought Jesus to the place where previously only ibexes, iguanas and herds of cattle were roaming about by erecting a place of worship and a tabernacle as His throne. Our Africans knew as little about the foster father and the infant Jesus as did the inhabitants of Heliopolis in the Nile Valley 18 centuries ago. The only difference is that St. Joseph brought Jesus, his light and his grace to the Africans on the northeastern tip of the continent, but we to those on the southwestern tip. He brought nothing to that land except sore feet and tattered clothes after a long and arduous journey from the land of the Jews. How sore your feet were and how tattered your clothes after the two-year battle with the thorns and cactuses of our former place of residence [Dunbrody]. Still well remembered by everyone is how sore your feet were. But this recollection is all the more gratifying in that we now experience every day how many victories God allows us to win. Is not every baptism of a local person, previously thought to be unapproachable and unconvertible, a victory for the good cause, and even more so for Trappists? They had already been said to have committed a great folly by leaving Bosnia and moving from Dunbrody to Natal. However, St. Joseph proved to be not only our foster father, but also our missionary advisor. He did not let us pray in vain. In truth, he can say to us Trappists what the Egyptian Joseph said to his brothers in the flesh: "Pro salute vestra" - For your salvation God has sent me to Africa (Egypt) and indeed ahead of you. “For your salvation" means, on the one hand, for your benefit, so that you do not starve in Africa, but have a foster father in Joseph, who knows what it means to be in need in Africa; on the other hand, it means for your example, that you can also learn from Joseph what missionary zeal is.

For this reason, we also want to place everything that relates to conversion and Christianisation under the protection of St. Joseph: the schools, the boys' and girls' institutes, the preaching shed and later the mission church. Moreover, St. Joseph can also address those words to the African people, saying: "For your salvation, for the good of your body and soul, God has sent me to you in Africa, so that you may have in me a foster father and protector.” Let us hope that St. Joseph will touch many hearts in Germany that they will help our people get clothes, decent housing and training in various trades, especially in his own beloved carpentry, by providing them with what they cannot furnish themselves on account of their neediness and lack of skill.

Finally, let us hope that the great Father of Christianity and Patron of the entire Church will help us all to die a good and holy death. Amen.