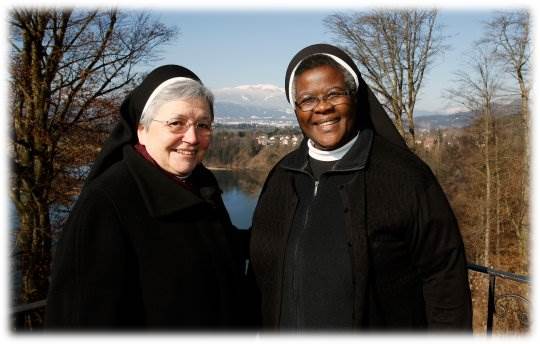 On the occasion of the first visit of Sr. Monica Mary Ncube, Superior General, to Klosterwernberg, our Austrian Provincialate, the Diocese of Gurk published the following on 22 March 2018.  Click here for the article

Sr. Monica Mary Ncube, Superior General of about 800 Missionary Sisters of the Precious Blood worldwide, was elected in September of last year.  Born in Zimbabwe, Sr. Monica Mary paid an “orientation visit” in order to get to know the 65 sisters of the Austrian Province of whom 57 are living in Wernberg.

For Sr. Johanna Maria Wagner CPS, Provincial Superior of Austria, the visit of the Superior General is a “special joy”. Getting to know the sisters personally is not only important for the sisters in Austria but also for the future of the Congregation in the neighboring countries.  A central point of the orientation visit is the establishment of the “European Province” in the near future, which will consist of the Provinces of Austria, Germany and the Netherlands. Sr. Monica Mary emphasizes the importance of community and solidarity which will strengthen the missionary outreach of the Congregation worldwide.

The active Congregation of the Missionary Sisters of the Precious Blood was founded in 1885 in Mariannhill, South Africa by the Austrian Trappist Abbot Franz Pfanner. Today, about 790 sisters are living on 98 stations in 20 countries. Through their lives, the sisters want to spread a message of joy, of hope and of reconciliation.